In the world of art you realise as an artist you are sometimes pretty vulnerable and left open to all kinds of so called professionals.  My work has just come back from an exhibition at Six Foot Gallery and as you can see from the photos the works were not really fit to be shipped.  One was damaged on the way to the gallery or so I was told however the gallery did not make any effort to protect the corners of the large scale photographs on their return and now all are scrap.  It is a shame as normally an exhibition is a highlight, a moment to enjoy your work being received by an audience but in this case was soured by the lack of care and concern the gallery took in returning the work.  Always hard to deal with when I am dealing with it remotely whilst working here in New Zealand and the gallery is in Glasgow.  It is a shame and a waste of artworks and money however I guess through these processes we learn and realise that at all costs trust yourself to do as much of the delivering as possible. 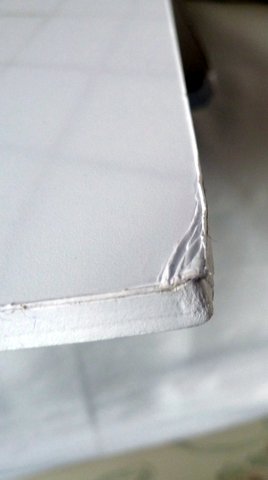 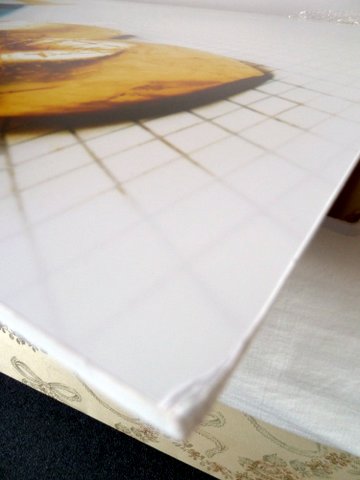 In todays art world we are blessed to have such interaction on a global scale where you can see and be inspire by work from all corners of the globe.  The only hard part is actually seeing these works in person.  Unfortunately this is an exhibition that I missed whilst overseas which is a shame as it would have been good to see the artworks using glitched technologies.  I am currently working with glitch sampling here in New Zealand and building sound collages from these samples.  The manipulation or creation of works through active errors is interesting.  Removing the artist hands from the direct control always opens new means of understanding and possibilities.

Only a few days left to see Glitch Moment/ums at Furtherfield Gallery in Finsbury Park! The show is about glitches or those malfunctions, bugs or sudden disruptions to the normal running of machine hardware and computer networks.

From a video tutorial on how to make your own glitched visuals to screen captures of glitches weaved in black and green, the exhibition shows various approaches by artists hacking familiar hardware and their devices which include mobile phones, and kindles. They disrupt both the softwares and the digital artefacts produced by these softwares, whether it be in the form of video, sound and woven glitch textiles.

It’s a stimulating show for anyone who is already interested in glitch culture. And it’s an eye-opening experience for those who have only vaguely heard of the artistic approach to tech errors. I’m somewhere in the middle. I’d never pass for a glitch expert but over the past few years, i’ve encountered a few artworks that make a creative use of accidents or create them on purpose.

Glitch Moment/ums was curated by Rosa Menkman and Furtherfield. One can’t dream of a more competent curatorial team: Rosa is the editor of The Glitch Moment(um) book (which i can’t recommend enough) and the organizer of theGLI.TC/H festival. Among their many activities, Furtherfield are running one of the most approachable and though-provoking galleries dedicated to practices in art and technology i’ve ever visited.

Because i still have much to learn about everything tech & glitch, i contacted visualist, theorist and curator Rosa Menkman and asked her a few questions about the show and about glitch culture in general:

What does moment/ums – the title of the exhibition – refer to?

The title of the exhibition ‘Glitch Moment/ums’ references ‘the Glitch Moment(um)’ book I released in 2011. In this book I describe how my first encounter with a piece of glitch art came hand in hand with a feeling of shock. What had once been a first person shooter was now a broken, pixelated vortex of confusion (Jodi, Untitled Game, 2006). I was lost and in awe, trying to come to terms with an experience that seemed unforgivable. But finally, these ruins of expected functionality revealed a new opportunity, a spark of creative energy that showed that something new had taken shape. I felt questions emerge; what is this utterance, and how was it created? Is this perhaps …a glitched video environment? But once I had named the glitch, the momentum -the glitch- was gone …and in front of my eyes suddenly a new form had emerged.*

These days I try to understand glitches as a manifold of moment/ums, having their meaning depend on time, discourse and context from which they are perceived. First, the glitch is a break from an expected flow within a (digital) system. Here, it is perceived as an absence of (expected) functionality and often experienced as an uncanny, threatening loss of control. This moment itself then can become a catalyst, with a certain momentum – a power that forces knowledge about actual and presumed media flow, onto the viewer. What was voided of meaning, becomes interpreted and gains new meaning.

But as I wrote in the (Glitch) Art Genealogies catalogue: [the meanings of] these glitches are constantly subject to revision: their language systems emerge, their meanings shift, idioms ossify and standardize into a fashion or genre.
…and then they change again.

The glitch thus heralds a transformative power – a potential to modulate or productively damage the norms of (techno-)culture. To study glitch is to engage a study of the succeeding turns and changes of failure and functionality, revolutions and ossification. A concept represented in Antonio Roberts work ‘What is Revolution?’.

How come something that used to be regarded as a problem has been elevated to a phenomenon that is exhibited online and in art galleries?

I feel that many people have lost the ability to formulate questions – this generation has become good at researching and finding answers or creating new datasets: In university, in the library, or on google (‘the internet’) we are conditioned to find and formulate answers. However, I feel there is a general inability for conceptualizing new questions. Maybe this is because we don’t understand things well enough to be able to formulate the questions we have or because we have been conditioned to see things in a certain way, making it difficult to shift our perspective.

Personally I think that one of the most important roles of art is to create problems that provoke curiosity – the impulse to investigate the limits of what we know and to ask questions. I understand glitch studies as a field investigating dis-functionality that can be co-opted into a desired functionality.

And because glitch art is so seducing, i’ve also been wondering whether or not it has already been translated into a more mainstream commercial world?

The concept that a glitch can be designed or distributed through standardized glitch software, seems at first maybe a-typical, but has in fact become a more and more common tendency and even important tradition in recent glitch art. More and more ‘new’ glitch art is being modeled after authentic glitches inherent within older media, perpetuating a shift from destabilizing breaks within technology or information-based processes towards a generic and associative display of more or less ‘retro’ effects.

Besides this, mainstream media have a tendency to leach onto any emerging aesthetic and try and capitalize on it.

The biggest loser Australia in which glitches are used as transitions between spy cams that film ‘illegal’ activities of one of the contestants.

I actually created a youtube channel in which to collect glitches found in popular culture and media. It’s a very loose collection of snippets of advertisements, movies, videogames and television that use glitch effects for different purposes. I think these forms of glitch are examples of the growing vocabulary of media materialities in which different glitch effects gain meaning beyond their original technological /root. Some day I actually would like to write a dictionary of glitch effects.

What’s next for GLI.TC/H? Are you planning other exhibitions, publications or events?

GLI.TC/H is the title of a festival I co-facilitate with Nick Briz and Jon Satrom, which has been running for three years now. GLI.TC/H concepts and ideals are based on the free and open sharing of inspirations and theoretical and technological knowledge and maybe even more so on creative community building (DIT = Do It Together), poking and pushing. The GLI.TC/H happenings aim to bring like-error-minded bug collectors together IRL, to engage and share work/ideas/concerns and to foster collaborations.

So whats next? First off… we might be losing our domain in the near future due to “a personal dispute” based over the .tc extension (which is associated with the Caicos Islands). This is why the name of the GLI.TC/H festival might change to GLI.TX or maybe GLI.FK…

Besides this we are working on a GLI.TC/H 2112 READER[ROR} – a publication associated with last year’s festival.

Ant Scott, Beyond Yes and No, 2013. Image Furtherfield

In my own practice I have interested in spaces that are under utilised and focus on expanding their use and meaning.  Though not really providing practical outcomes or real life answers.  I prefer to suggest and open up discussion about a space.  However here in this film by Monocle we see people within cities in Japan, Norway and the US making the most of spaces within the city infrastructure.  This is city farming.

I recently read a post about Chinese Nail Houses.  Nail houses are homes where the owner has refused to sell to property developers and thus has stayed in their house whilst construction of modern buildings and highways have continued around their four walls.  The examples of nail houses are incredible and highlight the last stand and unique position these houses have.  Memorials to a certain idealism and statement about the need for progress.  Here is the link to the whole article: click here 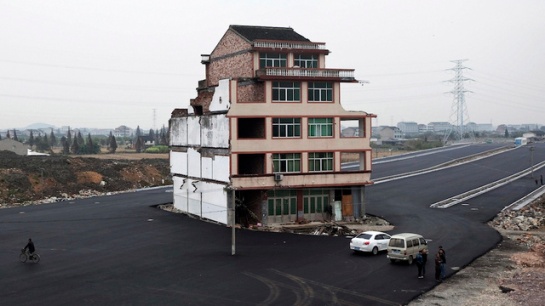