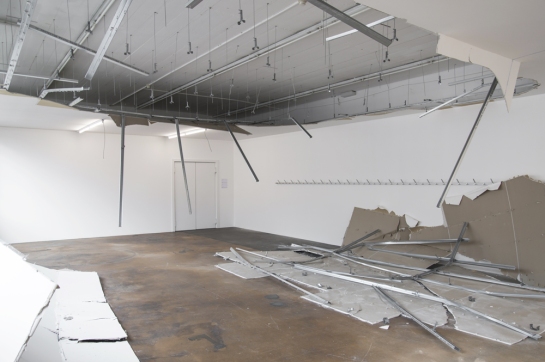 Now presented at Mamco, La Chute (‘Falling’) involves a similar animation of the commonplace. On entering the Don Judd Loft, visitors will no doubt have a frustrating sense of having got there too late, when it’s all over, and seeing nothing but the remnants, the ruins of a spectacular, violent performance. On the floor is a large piece of ceiling that has just come down, exposing its metal skeleton. Some viewers will be stunned by this seemingly alarming evidence that the building is starting to fall apart. However, more alert eyes may recognise an attempt by the artist to sabotage the authority of the museum, thereby reviving the radicalism of a whole generation of artists who have turned their backs on the whole institution, such as Michael Asher, Hans Haacke or Hans Schabus. And yet the reference stops there, for the damaged ceiling reveals no baleful backgrounds or spectacular bursts of light. Instead, above the ceiling is another ceiling. The thing lying on the ground is simply a piece of lining, stage scenery. It refers to an earlier state of the premises — the Mamco building is a disused factory — as well as to the twilight, romantic vision of its decay. Falling can then be seen as an allegorical  expression of ‘constancy in the laws that govern the world’ — also briefly seen in Reist’s video Averse(‘Downpour’, 2007), in which fluorescent tubes hanging from the ceiling of a multi-purpose room (an office? a classroom?) break away one after the other and shatter on the floor.
This falling also implies a similarity between exhibition spaces and work spaces. Dropped ceilings are part of the architectural vocabulary of offices, but seldom of museums — and this is accentuated by the presence on one of the walls of a row of coat hooks whose shapes are dictated by the combined laws of rationalisation and safety. A changing-room locker with several twitching bags whose undulations recall the briefly brushing bodies normally seen in these cramped spaces. A little further on, another destructive force, another effect of the laws of gravity can be seen in a large wine stain on the wall together with bits of broken bottle, the result and the cause of a movement halfway between a drunken brawl and the polished ritual of a christening. Here we can also detect a nod to some famous avant-garde works — first and foremost Robert Smithson’s Asphalt Rundown(1969). But, in putting her intervention on the scale of a domestic accident, Delphine Reist is again subtly alluding to the museum setting. The form presented here recalls both the opening of an exhibition and the cleaning of the rooms where it takes place. Reist’s ‘falling’ takes us through this shared panoply of movements, objects, situations and furniture — a salutary plunge towards a ‘reality on this side of our threshold of awareness’.

Delphine Reist was born in 1970 and lives in Geneva.
* This English translation has been provided with the support of the J.P. Morgan Private Bank.

Reists’ works seem to use actions, past, present or future to construct or deconstruct spaces, capturing moments for the viewer to reflect on.  If you would like more information on her work please see the Lange + Pult Gallery where she is represented click here. 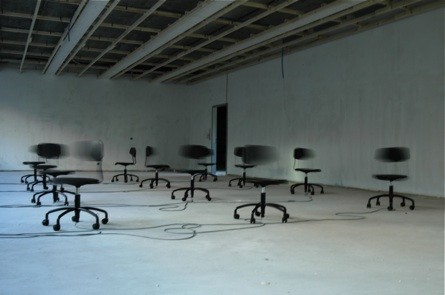 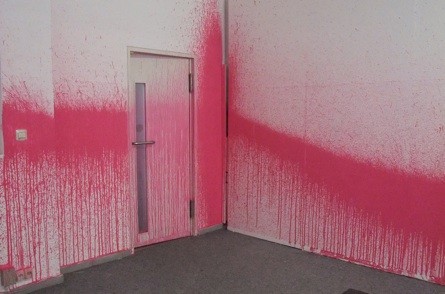